Imagine if you could walk from your home, to your place of work, to do your shopping, without breaking a sweat. Sound idyllic?

Instead of scrambling and paying rising premiums for parking in dense city centrals, tending to the maintenance of vehicles, or enduring traffic for hours on end, one could readily access their destinations and enjoy the multiple benefits of exercise in doing so.

Walkable cities have a long list of benefits for society as well. From boosting the economy and slashing carbon emissions, to building community connections and improving people’s wellbeing simply through getting them moving. Fewer cars means less traffic, less pollution, better health and more community interaction. But what do parking bollards have to do with this kind of city planning? To answer that, let’s start with what makes a city “walkable”.

What makes a city walkable?

Essentially, a city’s walkability score is determined by how easy it is for an individual to go about their day the old fashioned way – by walking, or perhaps cycling. No public or private transportation required.

Factors kept in mind when determining this sort of score include:

What do parking bollards have to do with walkable cities?

A lot! Bollards may be the bridge between currently un-walkable cities and futureproofing them to be walkable later on.

According to “Walkable Cities”, by Jeff Speck, the next best thing to putting walkability at the forefront of city planning is to reintegrate it later by decreasing vehicle-dominant spaces and increasing walkable spaces. This often means incorporating bicycle lanes and more footpaths between locations people may have historically required cars to navigate.

Bollards are one of the key ways to add in the bike lanes and pedestrian lanes that make cities more accessible to those outside cars – and they can be contributed to almost any part of the city to delineate cars from pedestrians. Bollards physically secure the safety of passer-bys, while clearly allocating lanes for various uses. 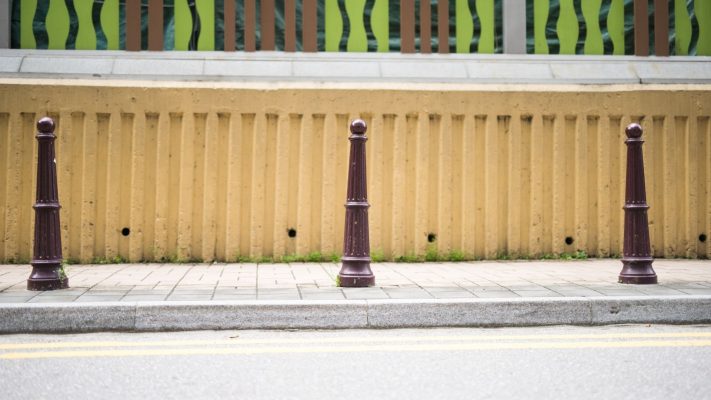 You would think such flourishing results would have city planners investing more in the walkability of cities from the outset. But the contrary remains standard practice – cities still overwhelmingly favour cars in their infrastructure and design. There is a reason this trend developed, traceable back to the 19th Century, where the noxious fumes of factory production led to a practice called “single-use zoning”.

Single-use zoning divided up area usage into “zones” and yielded positive results for society’s health because it separated residences from the pollution output of factories.

However, that was then, and the situation has since evolved. Now, factories are better regulated and it is through the sheer volume of cars that cities are seeing the noxious carbon emissions compound into something untenable. What would enshrine better health today would be cities that permitted more eco-friendly modes of transportation such as bicycle riding and walking. This would limit our dependency on diminishing resources such as fuel or electricity, while putting exercise back into the course of people’s daily lives.

Instead of reverse course, city planning seems to have doubled-down on the success story of single-use zoning. Jeff Speck refers to the industry as having grown “zone-happy”. The repercussions of radical zoning practices simply stretches the distance between one person’s errands further and further afield, until the viability of walking or cycling is non-existent, and individuals become reliant on private or public transport simply to navigate their daily lives.

Speck suggests switching our perspective on “zoning areas” into one where we instead “zone within areas”. This means that instead of a practice called “single-use zoning”, where hospitals, work, residences, and retail might be split into different city zones, we focus on creating robust self-contained communities that allow an individual to walk between home, work and shopping without depending on cars or public transport.

Can you imagine the benefits? Stress-free mobility, a reduction in fuel expenditure, car maintenance, public transport fees and hours spent stuck in traffic. Not to mention the vast array of benefits for people’s health from staying active!

Walkable cities are not a pipe dream, either. Singapore, currently a smart cities thought leader, is already embracing this forward-thinking trend with the brand new, eco-friendly, walkable city of Tengah.

So there you have it. Parking bollards may well have applications far beyond their car-centric origins.